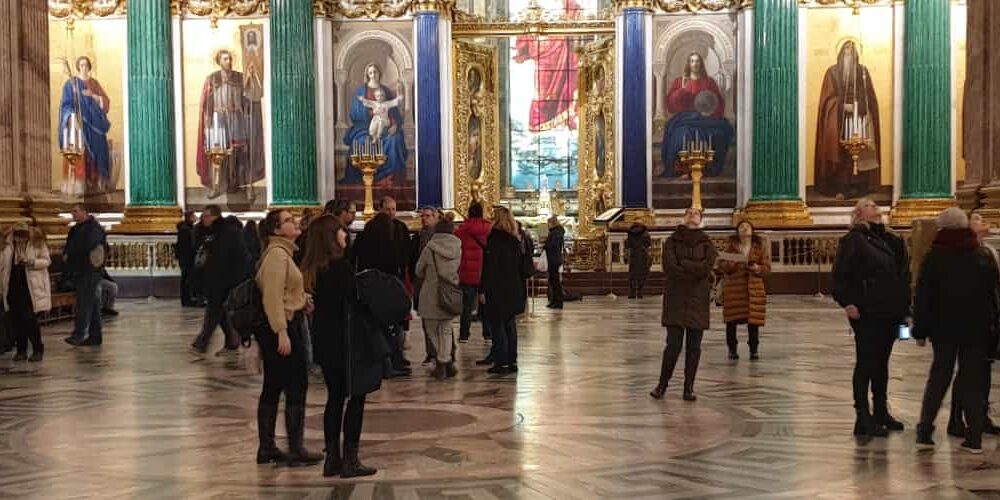 St Isaac’s cathedral is one of the most recognizable symbols of St. Petersburg and practically the icon of the city’s skyline. St Isaac’s is not only an important landmark and a monument of the 19th century architecture and craftsmanship. It’s the museum inseparably tied with the history of St. Petersburg, starting from its very foundation. Everyone living in St Petersburg has his or her own private family stories (very meaningful and touching), connected with it.

In the 18th and 19th centuries Russia was a very religious country in general. As soon as a new city was founded, churches for the new inhabitants and constructors were founded too. The city grew and changed its face, so did the churches.

The first church dedicated to venerable monk in Dalmatia Isaac, Peter 1’s patron saint, looked quite small and modest. It was built of timber close to shipyards. Nobody expected it to last long and represent the whole country – it was meant for daily prayers. It soon got dilapidated and was rebuilt.

The second St Isaac’s church also saw Peter 1 – the emperor laid the corner stone himself. The graceful spire of the new church was in harmony with the spire of Peter and Paul Fortress… but the location was ill-chosen: the foundation was soon washed out by the Neva waters and the church nearly sank.

The next ruler who took part in numerous constructions of St Isaac’s was Catherine II. She wanted not a simple church, but a majestic cathedral decorated with Italian marbles. This project passed away together with the empress: her son Paul I hurriedly finished the structure with bricks instead of marble slabs. The new church looked awkward and was unsafe, as during church services bricks occasionally fell on the heads of visitors.

Emperor Alexander I decided to sort out that issue in the most drastic way: the old structure was pulled down, and a competition for the best project was announced. A lot of talented and renowned architects  participated in the competition, but it was difficult to satisfy the Emperor. By the time a young French architect named August de Montferrand was introduced to Alexander I, practically all the projects were rejected. Montferrand presented the Emperor with an album including 24 projects: St. Isaac’s Cathedral in baroque, rococo, renaissance styles… Alexander I chose the neo-classical version, and the construction works started.

Everything about St Isaac’s Cathedral is outstanding, record-breaking for the 19th century:

The tsars perceived St. Isaac’s Cathedral as not only the principal church of the Russian Empire, but the symbol of its power and fabulous wealth. The major services with the largest number of people (12 thousand people standing!) took place here on the principal religious holidays.

By the way, this cathedral has never been property of the Russian Orthodox Church. In the 19th century the Church made several attempts to get hold of it, but they all were rejected by Emperor Alexander II, who stated that the cathedral was built on the money of the Russian state and was to serve to the glory of the Russian Empire and St. Petersburg, its capital.

In the first half of the 20th century St. Petersburg – Petrograd – Leningrad went through unbelievable rigors. The Russo-Japanese was and revolution of 1905 following it, WWI (the Great War), two revolutions of 1917, the cruel Civil War, WWII and the terrible Siege of Leningrad, Stalin’s political repressions…

For people who survived in these incredible hardships, St. Isaac’s became a symbol of the times and optimism they managed to keep.

Taking you through the basements of St. Isaac’s, where a special exhibition dedicated to the Siege of Leningrad is laid out, museum workers will tell you how half-starved siege survivors took care of the museum items stored there hidden from the bombs, and how museum workers lived there in humid darkness, sharing the scarce food morsels and writing their journals, hoping for the best. It’s a striking exhibition that we recommend you to add to your tour itinerary.

If you would like to get the bird’s eye view of St. Petersburg, climb 260 plus steps up the winding staircase and enjoy the vistas opening from St. Isaac’s colonnade.

It’s easy to arrange a tour of St. Isaac’s Cathedral.